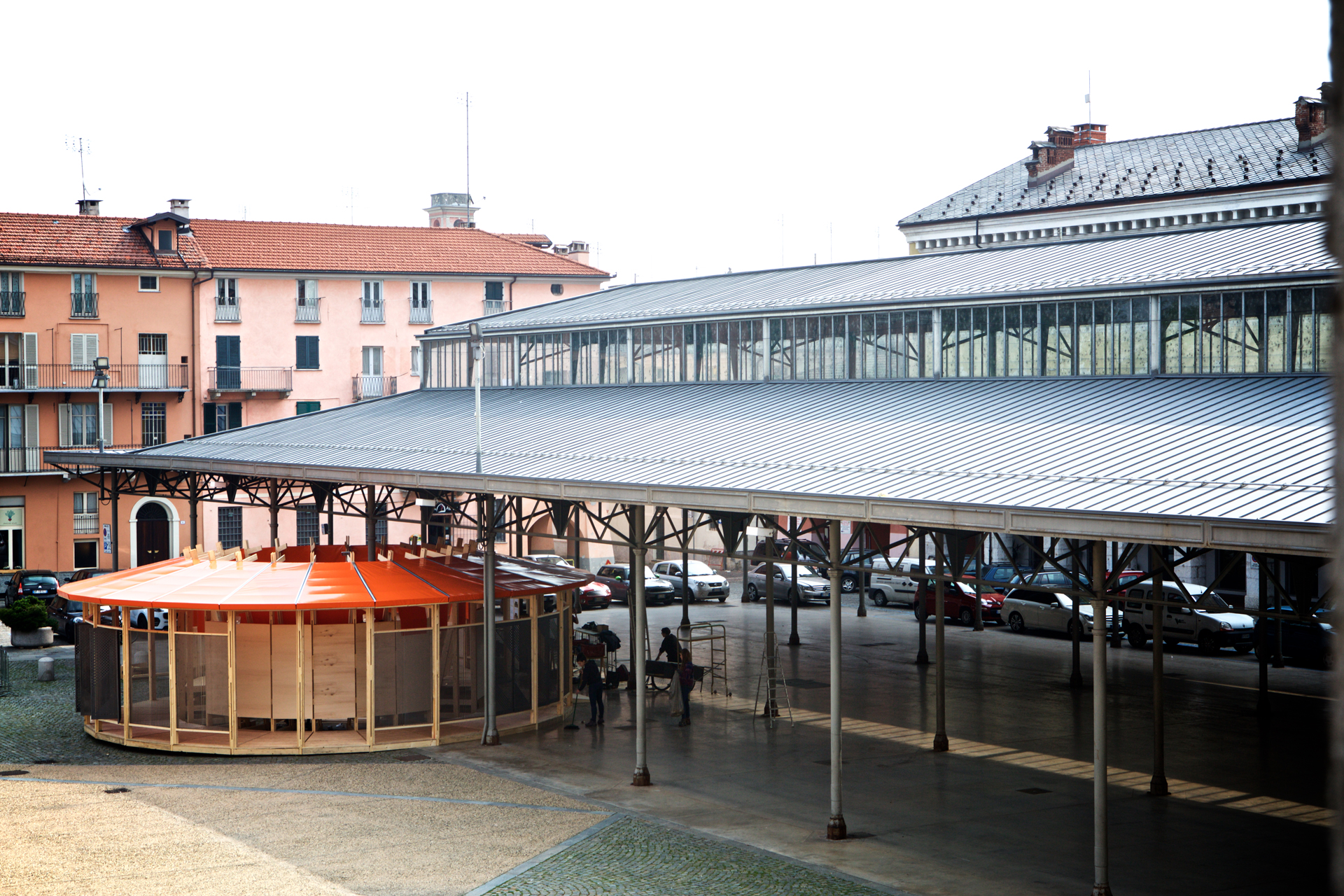 A.R.C.A. (acronym for Art, Research, Community, Inhabit) is a project born within the contemporary art platform ZOOART, whose goal is to combine the experience of art with reflections on how live and share creation in urban space. The program of this artistic framework extends to the territory of the province, specifically to the cities of Cuneo, Saluzzo and Alba (Piedmont).

In Cuneo, Piazza Virginio from 6 to 12 April 2017 was the stage for the construction workshop of the pavilion, together with 30 architecture students from the Polytechnic University of Turin (followed by Prof. Daniele Regis and the architect Roberto Olivero) and the Art.ur team. At the end of the construction site the students presented the project proposals on the theme of the A.R.C.A. that they had imagined and developed during the course of composition; the exhibition has been set up in the square for a week.

The second stage of the device was Piazza Cavour in Saluzzo, where, for the entire month of May, A.R.C.A. has hosted the works of the artist Grazia Amendola and it has been part of the artistic format of start / history and art – Saluzzo.

In June, finally, A.R.C.A. it has landed in Alba, serving as an exhibition container for Ettore Favini’s artistic work and as a fulcrum for the activities planned in synergy with the community of the Tetti blu district.

Ephemeral Living: the central space as an archetype of temporary inhabiting

The A.R.C.A. refers to the models of the nomadic architecture, an architecture whose structures appear and disappear almost instantaneously in already consolidated urban areas, leaving at the same time evident traces, even if intangible, of their transit. The places are enriched with new memories and meanings, which are able to activate unconscious imaginaries and bring out potential untold potential.

A.R.C.A. is part of that large family of mobile, unstable, provisional architectures, dynamics that populate the human imagination since ancient times and which, in the contemporary world, find a new raison d’être. A.R.C.A. is a pavilion that opens up as an instantaneous square, it holds temporary installations that are reorganized within the space according to the needs; it is an infrastructure that can be assembled and disassembled in a few hours using light materials coming from the same territory in which it is inserted.

The central form, naturally full of symbolic and spiritual meanings because of its purity and geometric simplicity, is the most immediate gesture in defining a space and in its delimitation.

Circular constructions have many advantages, such as, for example, the maximization of the volume and the internal space in the face of a reduced consumption of soil and resources, a good energetic behavior, the possibility of using lighter and more easily transportable materials, remaining statically stable.

Because of these characteristics, the circular structure represents the archetype of a wandering space.

A.R.C.A. is a device with a central plan, which circumscribes  from time to time the space in which it is placed, creating a gathered and protected space. It is a traveling object that carries a strong identity, which is overwritten by interactions with places and people.

A.R.C.A. is a volume whose base is a polygon consisting of twenty-four sides and whose structure, made of fir wood, is assembled by simple repeated modules, arranged in a radial shape. The succession of these modules can be changed to create different figures and areas, depending on the needs of use.

A.R.C.A. is a threshold that defines a transitory space in dialogue with its urban surroundings. Its identity is defined by crossing and inhabiting the city through memories and imageries that overlap and enrich it with new meanings.

A.R.C.A. is a community space, a mobile device and, at the same time, a permanent place through which art moves in cities, becoming accessible to everyone in a public and free way. The central room is protected by the ring that fences it, but at the same time it is open to the external environment, making it perceive differently from those who enter it.