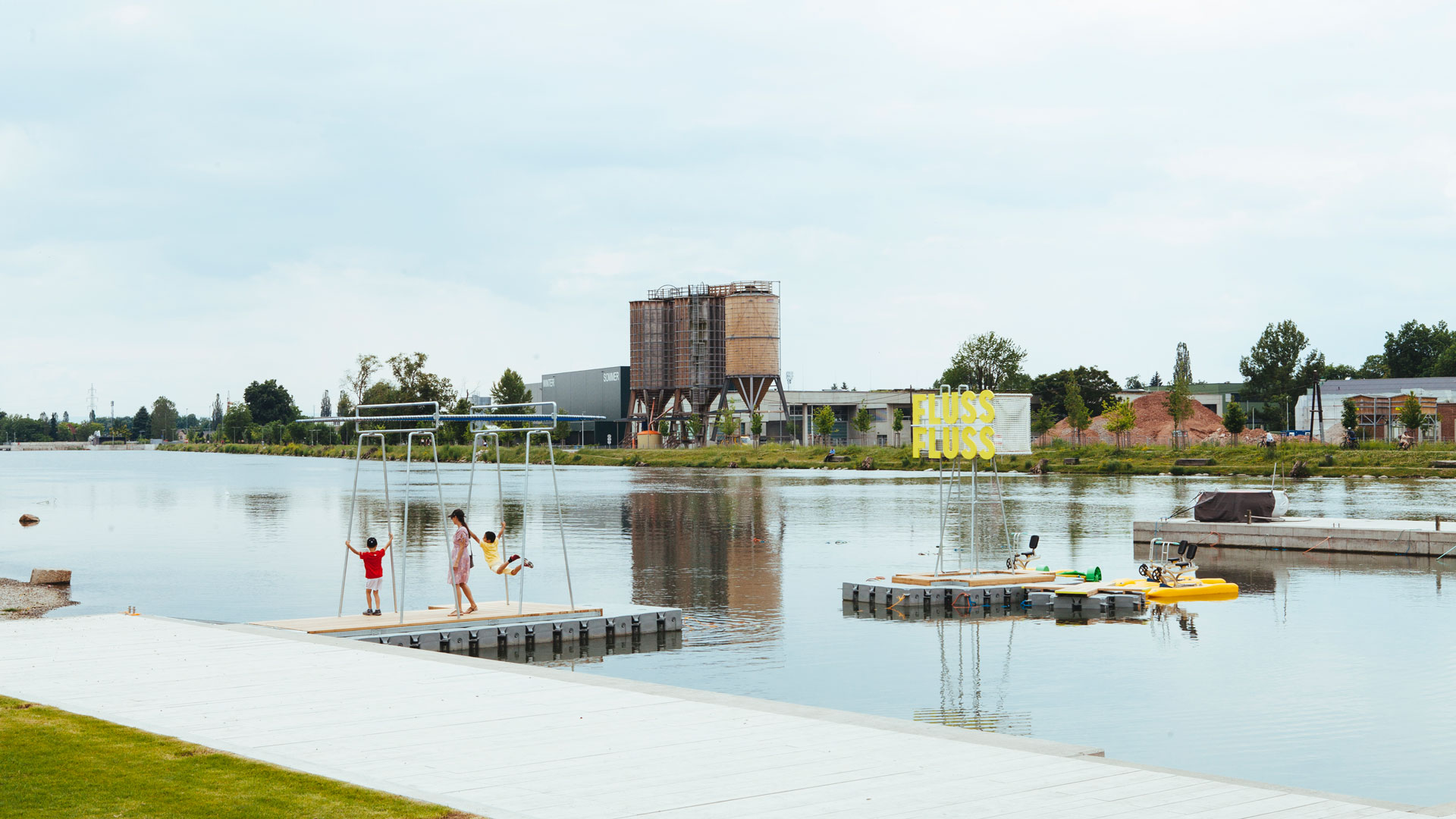 Graz, 2021. At the border between Liebenau and Puntigam district an archipelago emerged.

A group of people, formed by artists, artisans, professors, inhabitants, passionate dreamers, and swimmers of the district and beyond, became temporarily castaways on the Mur to build together a new public bay.

The crew inhabited the place by alternating moments of fatigue with convivial ones, sharing visions of the future, stories, and ideas, all sitting around the dining table at noon.

At dawn and dusk, they jumped off the pier and floated to the middle of the bay, balanced on strange platforms.

New lands danced in the water, composing, and undoing themselves, following a mysterious and random tectonic play.

FlussFluss is the result of a collective research and construction process and is part of the research NORMAL x 4 – Direct Urbanism conceived by the artist group transparadiso for the KulturJahr – Graz 2020. The research addresses current urban issues using artistic-urban strategies to initiate a long-term process in the suburbs of Graz.

FlussFluss – Castaway on the Mur, is a project operating in an area between the district of Liebenau and Puntigam, south of Graz. The site has been at the center of a controversial debate throughout the city in recent years, as a reaction to the profound transformation of the landscape of the Mur River, caused by the new power plant. Following the public debate, in its first phase the project starts an open discourse between orizzontale, transparadiso, the other artists involved and the inhabitants of Graz, questioning: what is the river Mur? And what is a river for a city?

This reflection is materialized through the river map illustration, “What is the Mur?”, while six posters with different questions on the theme open other ideas and imaginations. FlussFluss has no intention of giving a conclusive answer to these questions, nor to lead to a univocal vision of the future of the city. Its goal is to build a public archipelago and commons on the Mur water: a place where people can meet, to collectively explore and test new possible ways of inhabiting public space and imagining the city. Questioning as an engine of change, FlussFluss as a place of convergence.

The architecture design consists of three floating public spaces: the FlussFluss habitable tower, the canopy island and the PlusPlus mobile unit. The tower, the main element of the space, is funded by the KulturJahr – Graz 2020 and is positioned in the center of the bay, functioning as a landmark. The steel tube structure supports the yellow “FLUSSFLUSS” (RiverRiver) sign and invites people to take an obvious but necessary action: to look back at the Mur River. The tower sits on a floating foundation and holds a net on which to lie down and rest. The canopy stands between land and water on a rectangular platform. This multipurpose space, connected to the existing concrete pier by a hinged metal ramp, is the entrance to this new public dimension. The PlusPlus unit is a shuttle to reach the tower. The structures are complemented by larch wood surfaces.

The project’s atmosphere seeks to bring back to the urbanized environment simple and intuitive behaviors such as sleep, conviviality, contemplation, free play and use of space in a context that is often too programmed, functionalized and designed.

A large table 5 meters long, built during the construction program, allowed convivial activities in the space. The table subsequently traveled to the north of Graz, for PLATZEN, the project by Publicworks and Studio Magic hosting the meetings with the inhabitants of Andritz.

FlussFluss – Castaway on the Mur creates public access to the new bay of am Grünanger by opening it up to the city’s programs oriented towards education, ecology, solidarity, and equity in which to give space for confrontation and discussion of existing struggles. Or to offer an alternative to the city’s hyper-productive system.

FlussFluss created a network, becoming a concrete place for collaboration where art, science, and different experiences can mix to create new stories, new practices, and new imaginaries for tomorrow. On June 11, the light switched on at am Grünanger and FlussFluss opened. Will it stimulate a new social awareness and sense of belonging, starting from the care of the small archipelago of am Grünanger? Will it help broaden the view to the Mur River and the public space of the city of Graz?