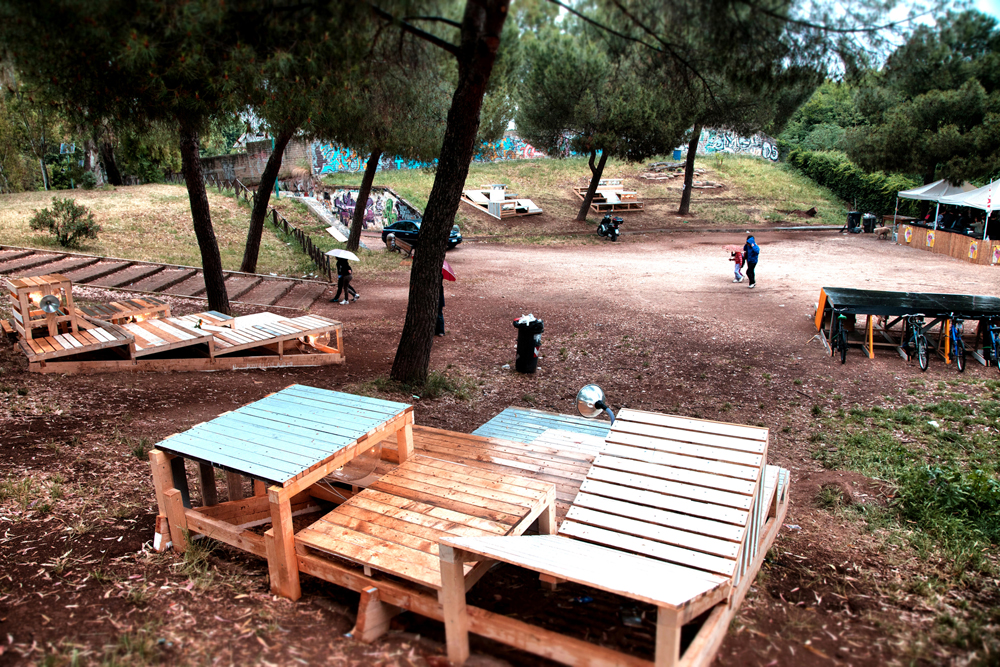 “S.O.S. Spazio Open Source” is a semi-permanent site-specific installation whose main purpose is the reactivation of a forgotten and abandoned public space. “S.O.S.” has been built by Orizzontale with 100% recycled materials with the participation of Madrid collective TXP and the students of architecture course of Università “Sapienza” of Roma, Italy.

SITE — The site in which “S.O.S.” has been realized is a complex space placed in a public garden in Centocelle (Roma) formed by a sort of courtyard surrounded by a earth-made hemicycle. The main interest point of the site, and at the same time its critical issue, was that it lies in the middle between the residential part of the neighborhood and the “Forte Prenestino”, a former military fort abandoned for decades and then reclaimed and restored by citizens in the last 25 years. While the internal space of the military fort is today completely revived by intense cultural and social activity, that make the “Forte Prenestino” a hub for the cultural life of Roma, the threshold space of the outer hemicycle was increasingly neglected and forgotten. Turned into a mere passageway without a particular identity, the hemicycle gradually became a ill-famed, unsafe and obscure “no man’s land” and ended up dividing the two worlds of the city and the cultural center rather then connecting them.

PROJECT — The project “S.O.S.” first arose out of the charming power of the threshold space of the hemicycle, from the recognition of its enormous unexpressed potential as a social connector and a cultural condenser. The guiding principle of the project was the idea that exactly the same characteristics that made the hemicycle an obscure place of nobody could be overturned and exploited to transform the site in an “all man’s land”, a place for encounters and communities. The main strategy adopted to make the space become a connector rather than a divider was, in spite of current practice in public space architecture and landscape design, the occupation of the space with new matter and images. The project, conceived by Orizzontale after a confrontation with Forte Prenestino occupiers and people of the neighborhood, takes the form of four similar but different “unusual objects”: four bleachers sized 3×6 meters were built on the facing sides of the hemicycle. Working individually as “relational machines” during everyday life, the four bleachers also interfere all together with the overall perceptive and symbolic qualities of the space, unifying it trough the suggestion of the existence of a virtual amphitheater. Indeed, during special events the four elements can actually work as proper stands facing a small-scale multifunctional stage built in the central space by Orizzontale and Madrid collective TXP. During night-time, when the cultural center inside the fort lives more, a special lighting system made of up-cycled spherical plastic beer kegs keeps the space enjoyable and wrap the hemicycle up in an dream-like atmosphere.

STRATEGY — “S.O.S.” is an actual intervention designed and realized in a specific real place, but is also a universally valid prototype for other different re- activations of common places. The guidelines that led the process are: 1. Activate a synergy between different levels of waste and scraps that the city continuously produce: from the construction materials, to the place itself (wasteland) and to the discontinued idea of a common place (waste-ideas). 2. Limit the amount of physical transformations of the site to the minimum required, with the aim of preserving existing qualities of the place, make the intervention completely reversible and cut down the economic and ecological impact. 3. Use low-technology techniques and make the dwellers build the space by themselves. We are deeply convinced that the act itself of taking care of a place is the fundamental first step for the community that could live in it.

REALIZATION — “S.O.S.” has been realized by Orizzontale, TXP and 30 students from Università “Sapienza” in the time of 5 days, during the activities of the first edition of “Babel2 – Independent biennale of critical living”, organized by CSOA Forte Prenestino from 14 to 20 May 2012. All the materials, excluding the lighting modules, came from the dismantling of the installation “Officina Roma” by raumlaborberlin, realized in the fall 2011 within the exhibition “Re-Cycle” at MAXXI Museum, Roma. The dismantling, carried out by Orizzontale during the week before the construction, saved more than 25 cubic meters of excellent wood from dump. The project, in spite of its size and of the extremely strong transformation effect that has produced, has been realized at almost-zero budget and almost-zero ecological impact. “S.O.S.” is the last of four actions organized by Orizzontale as part of project “KIUI – Kit for Instantaneous Urban Interaction” funded with support from the Youth in Action Programme of European Commission.