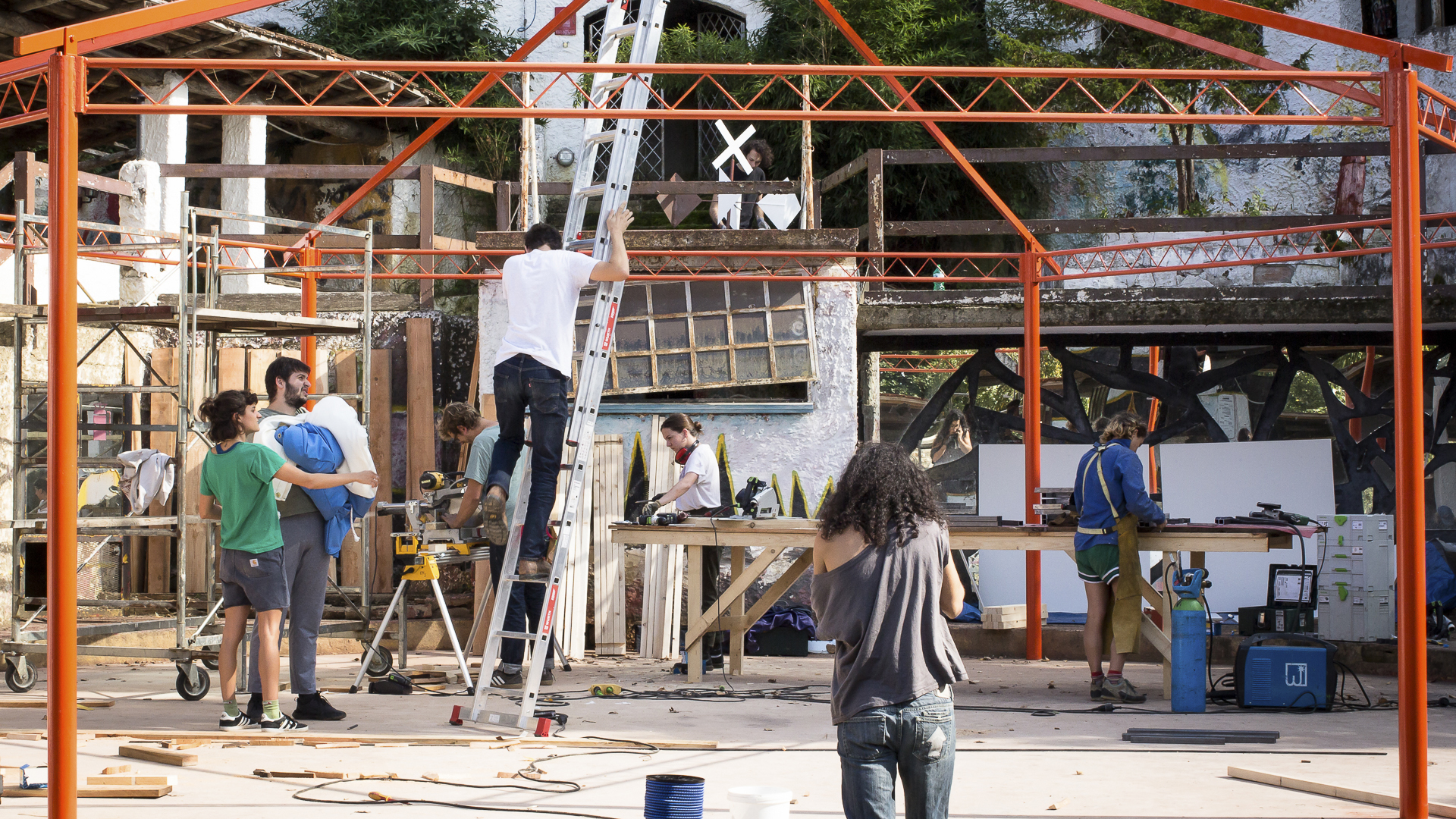 The Ricettario (Recipe book) is a format for experimenting and disseminating new practices to reinhabit and convert abandoned spaces.

From 22 to 27 September 2019 the once famous and now decadent BAIABLANCA, a former discotheque in Levice, Piedmont, hosted the pilot edition of the Ricettario.

Thus Ricettario – BAIABLANCA started. Together with the cultural association a.titolo, we have created a residence, a construction workshop, a program of convivial meetings and a party.

For this first experience we have chosen to collaborate with the Collectif Etc, together with the graphic design collective Super Terrain, Mikaëla Giry by Frida Mortimer, in addition to students and professionals from all over Italy, founding a research laboratory to study the space-time anomaly of the BAIABLANCA under the question; What is a Mexican style farm doing in Levice, in the middle of the Piedmontese Alta Langa?

Levice is a small village suffering from the same symptoms as other Italian “internal areas”; in fact the population is currently of just over two hundred inhabitants.

Throughout the 80s and the 90s it experienced a moment of fame thanks to BAIABLANCA, an exotic discotheque at the centre of the summer nightlife of that period. Known throughout the north-west of Italy, it was one of the engines of the local economy, attracting thousands of people to Levice each week.

Closed in 2007, this municipal property has been abandoned for years, in the absence of the necessary resources to restructure and without the desire of its demolition, given the importance it has in the collective imagination of the population of Levice and the surrounding municipalities.

BAIABLANCA represents a loisir model that has now become obsolete; in fact there are countless “ruins” of similar party spaces in all the provincial areas of Italy.

The Ricettario enters this structure, which has long been at the center of a collective care process born in response to the growing demand for recreational and cultural activities in the area, and as part of an action of the New Patrons program by a.titolo, in partnership with the Comitato Matrice, management entity of the territorial enhancement plan “Valle Bormida. A thought activity “, and in collaboration with the Municipality of Levice.

The Ricettario – BAIABLANCA had a preparation time of about a year, with a series of meetings to define and share the objectives and the project among all the actors involved, to find resources, spaces and materials for the realisation of the interventions and to plan the program of activity.

During the residency week the construction was organised into thematic areas: the entrance, the dance floor, the bar and the ground floor spaces, the wind tower / landmark, the furnishings.

We mixed and divided into teams of tailors, cooks, painters, carpenters, blacksmiths, while sharing and exchanging materials, tools, techniques and knowledge.

Fabrics, steel, wood of fir and larch were the materials used. Orange, white and blue paints dyed the graphics and created a new identity for the space.

During the workshop days, we improvised and organised screenings, meals and conversations in the BAIABLANCA and other spaces in the town of Levice. A series of “living together” exercises between foreigners and residents, following the idea of the recipe book, to generate a transformation by inviting people to inhabit public spaces as if they were domestic.

At the conclusion of the work, the Ricettario event began to inaugurate the BAIABLANCA in which we shared and compared different recipes and methodologies, ideas and practices for re-inhabiting and reconstructing forgotten spaces with Collectif Etc, Temporiuso and Banca del Fare.

Each guest of the recipe book also proposed one gastronomic recipe that made up part of the menu of the merenda sinoira , the typical meal of the Piedmontese tradition, which was originally consumed by the farmers during the harvest. The Pro Loco of Levice, directed the preparation and cooked the food.

In the late evening, the lights turned on, the music played and the party started. Between video projections of the old BAIABLANCA and unrestrained dancing, the past and the present mixed.

Ricettario – BAIABLANCA experience will be collected within the first chapter of the Recipe-book, a “practical manual of techniques for collective architecture”.

reactivation of an abandoned public building