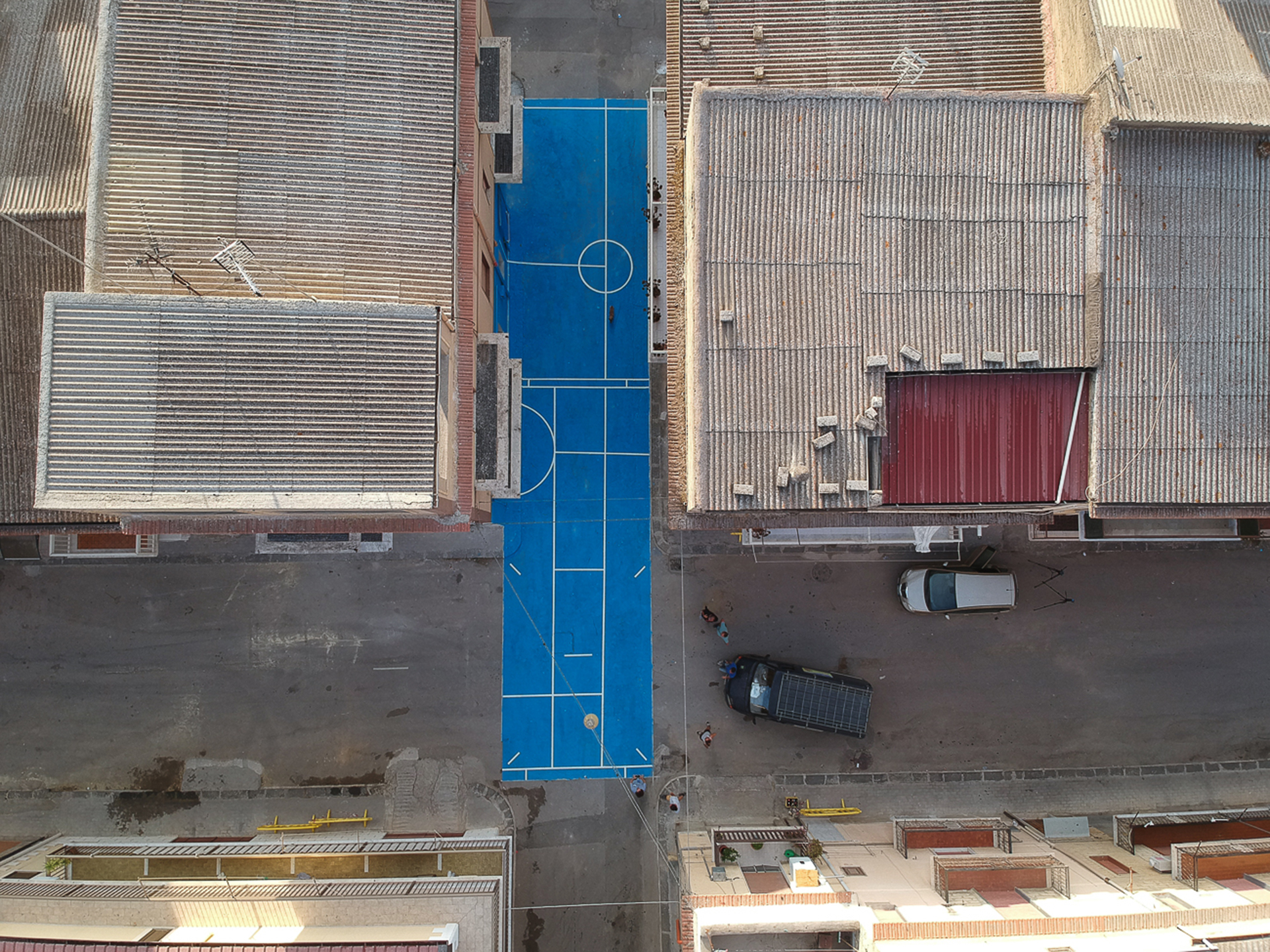 Riesi is a small town in central Sicily, in the province of Caltanissetta: the yellow and brown heart of Sicily, once a granary and a mine and now an inland area suffering from depopulation and marginalization.

Riesi’s history is intimately tied to Tullio Vinay’s name, a Waldensian pastor who founded the Servizio Cristiano center here in the 1960s and built the Monte degli Ulivi Village, designed by Leonardo Ricci, thus inaugurating that place as an educational, cultural, and social support for the most vulnerable groups in a fragile and isolated area.

From the construction of the Monte degli Ulivi Village, it started the idea of an inclusive architecture in Riesi, open to contamination and contributions from the context, in which the architectural work is shaped and reshaped by the architect and those who interact with him.

The Laboratorio Umano di Rigenerazione Territoriale (Human Laboratory of Territorial Regeneration) was born within this context. It is an international summer school whose objective is the recovery of a building seized from the Mafia and whose management is entrusted to Servizio Cristiano. It is a three-storey palace, the result of building speculation in the 1980s, once the home of a local boss and since his arrest, it has fallen into neglect and oblivion.

The Laboratory, in parallel with the action of physical recovery of the building, proposes a reflection on the abandonment of historic villages in the inner areas of the country, which today live a condition of marginalization and lack of opportunities. The theme has a strong symbolic character and represents a particular point of view in the relationship between memory and regeneration, interpreted here as removal and hope of a social and cultural redemption.

This first edition of the Laboratory, supported by the Municipality of Riesi, by the Forum Disparities Diversity, by the Polytechnic of Turin (Architecture Design Department), by IN/Arch, CNAPPC and the Board of Architects Caltanissetta, represented the first stage of the regeneration of the seized property. With the aim to open the building to the city to host a new school in which “… the young participants from Caltanissetta will be able to acquire the useful tools to re-inhabit the territory (…)”.

About twenty students and young graduates took part in the workshop, as well as numerous professionals who addressed the issue of recovering property confiscated from organised crime and strategies for inland areas from various points of view.

Except for the construction site, the workshop was held entirely at the Monte degli Ulivi Village, experiencing the collaborative and fruitful atmosphere of listening and sharing that has characterised the place since its foundation and which, with the Civico Civico project, has been attempted to extend into the urban fabric of Riesi.

Civico Civico is the name of the renovated space, in accordance with the Sicilian dialect that doubles adverbs and adjectives to reinforce a concept. The first intervention concerns the ground floor of the building, to open it to a public use, in visual and physical connection with the street, and to create within it some flexible spaces for different types of activities. Today Civico Civico is a space open daily for children and young people of Riesi, where active learning, the practice of confrontation and the sense of belonging to a community are tools to contrast school dropout, economic and social inequalities, even the pandemic.

During the realization of the project – and to some extent in continuity with the building experience of the Monte degli Ulivi Village – it was proposed an experimental intervention method to encourage, along with the physical transformation, the creation of new perspectives and relationships between people and places. Civico Civico is the result of a collective building, in which designers work together with local craftsmen, inhabitants and young professionals: the project preliminarily defined is continuously discussed and enriched during its construction.

The building site is no longer an exclusive place for the experts, but a moment of choral creation, of learning and meeting: the realization of a common good becomes a flywheel for sharing experiences, building social networks, and spreading a sense of belonging to the places.

The creation of a common good becomes a flywheel for sharing experiences, establishing social networks, and spreading a sense of belonging to places. The general objective of the proposal – which includes the phases of planning, implementation, and operation – is to create a stable system of relations, a community that, involved in the process of urban regeneration and in the activated cultural initiatives, can develop a new identity and belonging to the neighbourhood, thus becoming an engine for sustainable development and a better quality of life.

The design choices are oriented according to a principle of adaptability, both in space and time. The plan of the former residential building is modified through the simple subtraction of internal partitions, enlarging the rooms, increasing their capacity. The traces of the demolitions draw incomplete geometries in the new rooms, leaving the transformation visible. Light enters: all the window frames have been replaced and a window on Via Piemonte becomes a large glass door, to allow free access to people and glances; it is the new “civico” (street number), framed with fir poles and surmounted by a line of light, because the street should never be dark. The old garage shutter on Via Campania is replaced by an iron frame, whose design is the result of a re-elaboration of the characters observed in the local context. The large double-leaf door, which opens the interior space to the street, is tinged blue on the outside, along with the asphalt and plaster of the wall. The entire stretch of Via Campania (today known as “the blue road”), in agreement with the Municipality of Riesi, is being pedestrianised and transformed into a large open-air playground: where curved and straight white lines make up street games and suggest possible uses, entering inside to continue the new wooden floor.

Urban-scale elements alternately inhabit the interior and exterior space, functioning as seats, games, bleachers, bollards for cars. Similarly, in the interior the furnishings are simple and modular elements, to function at their best for different uses.

The project is just the beginning of a process of urban regeneration aimed at encouraging Riesi’s young people to live their town. The transformation does not end with the physical renovation of the building, but becomes a tool for a broader objective: recovering a collective and creative use of urban spaces, opening up meeting places and activities, promoting moments of active training, in which to learn crafts and different cultures.

“As in a Dantesque ascent through the building’s three levels, we started from the ground floor, the one closest to shared life, witness to the city and crossed by indifference, hope, suffering, a desire for redemption – often concealed behind the shutters – and joy, like that of the many children in the neighbourhood who spontaneously approached the work as it took shape, then became directly involved.” (D. Mollura, Il Giornale dell’Architettura)

“Our aim is to develop an informed community, made up of autonomous, independent people who, through civic commitment and personal responsibility, are able to manage their own lives in a society based on mutual respect and the freedom to choose between several alternatives”, emphasise the organisers of LURT 2020. The aim is, “through the school, to start responding to the urgent needs of the area, developing two phases, one immediate and one medium to long-term. The first phase consists of activating a series of training courses linked to the themes of organic farming and contemporary creativity. The second, more articulated phase involves young people adopting houses that have been vacant and abandoned for decades, recovering them through the process of self-building, and regenerating riesino’s urban fabric house by house. In this way, buildings of no architectural merit are reconsidered and re-inhabited, acquiring new meaning. Buildings resulting from speculation imposed by the Mafia can be transformed into architecture. The task of the school, which will be based in the confiscated property, will be to guide, through appropriate training, the local young people who join the project to re-inhabit their territory”.