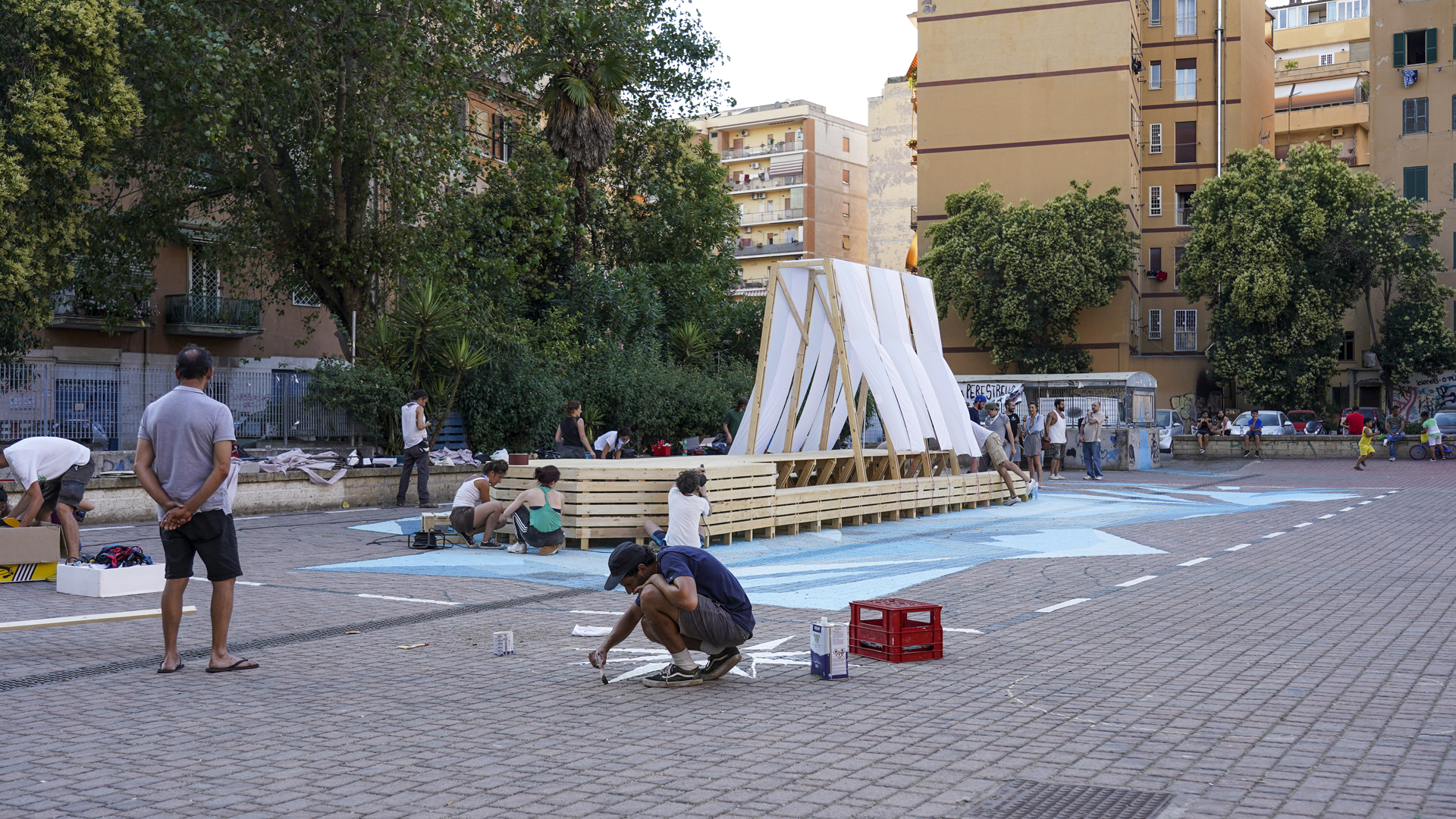 The “L’Argo- Perestrello 4.0” project is the fifth phase of an experimental research process started in 2010 in the Largo Bartolomeo Perestrello, in the Marranella district in Rome.

The theme addressed in the project is the build up of a process of placemaking and community empowerment, through design, architecture and public art.

“L ‘Argo-Perestrello 4.0” was developed by an interdisciplinary research group consisting of orizzontale, the association of social psychologists and art curators NOEO and the multidisciplinary creative studio No-Rocket.

The project took part in the Rome Public Space Biennale 2019, with a workshop in which we participated together with RAUM Utrecht and CheFare – Civic Media Art, discussing the methods and action used for urban revival in fragile territories, with case studies from Utrecht, Milan and Rome.

During the period from March to May, the research on the local stakeholders expanded and we organized a series of meetings to share the objectives of the “L’Argo – Perestrello 4.0” project.

During these meetings a proposal of summer activities for the Largo Bartolomeo Perestrello was planned on the occasion of the new process underway. This program of activities was then supposed to be negotiated and implemented in synergy with the Municipality of Rome V.

On June 24th the research phase has been shared with a public assembly to initiate the building site, further the assembly also reported on the previous process “Iceberg” and launched the new “L’Argo- Perestrello 4.0”.

From the 24th to the 29th of June, together with a diverse group of students and professionals, we activated the “shipyard” for the “Argo” in Piazza Perestrello.

After the melting of the Iceberg, the ice dissolved into a lagoon.

The ground graphics were developed by No-Rocket, who painted this transformation starting from the old and unfinished trace of the iceberg, thus returning a new recognizable visual identity.

The “Argo” is an ephemeral habitable structure searching for a crew.

In a week we inhabited the square and built this boat-shaped infrastructure, a symbol of the communities that exist within the square and the absence of borders that characterizes the public space.

The suggested function consists of an oversized table, equipped with a small stage. The Argo has also stimulated alternative uses, functioning as a walkway and playground.

On June 29, started the inauguration party of the Argo and on June 30 it was used for a neighborhood dinner, organized by the “Consulta of the Marranella”.

The research and action process on Largo Bartolomeo Perestrello aims at establishing a direct collaboration between active citizenship and public administration. Each phase of this project served to refine strategies and solutions to deal with the critical issues.

“L’Argo – Perestrello 4.0” is a project created with the support of the Embassy and general Consulate of the Kingdom of the Netherlands and with the patronage of the Municipality of Rome V and the Biennial of the Public Space in Rome.

Embassy of the Kingdom of the Netherlands - Education and Cultural Affairs, Municipio di Roma 5